Successful innovators are conservative. They have to be. They are not ‘risk-focused’; they are ‘opportunity-focused. - Peter Drucker

When Amazon reported a strong third-quarter revenue growth in year 2011, but indicated that they will spend more money to invest in continued growth, stock plummeted and traded lower at $181. Stocks was always bumpy when it came to Amazon in those years. It was due to the fact investors were derailed by short term results while company and its founder Jeff Bezos were playing long term game.

Amazon was earning so little while selling so much. Its stock price has soared more than 10,000% but still its operating cost % has dropped. Amazon was taking the customer focus to new levels and invested aggressively in long term. Today, we see for ourselves where Amazon as a company stands.

In 1997, when Amazon went public, Jeff Bezos famously said, “It is all about long term” in his manifesto to its employees. In 2005, he mentioned,

“We can estimate what a price reduction will do this week and this quarter. But we cannot numerically estimate the effect that consistently lowering prices will have on our business over five years or 10 years or more”.

Recently, even Walmart and Target took to long term strategy (2021) as their game play. Amazon was, and many companies today are marching to a different drum beat.

It is that companies like Amazon do is constantly sow seeds and watch carefully which one grows. Pluck or kill without emotion if the seeds don’t sprout, or not yielding what was expected. They are serious about their customers to the levels they are obsessed. They listen and experiment constantly. The one that grows are nurtured with patience. It’s not a 3-year plan but rather 7-year plan. Not many companies do that.

7-year plan may sound risky, but this seems to be a pattern for growth companies and ability to snatch the right moments.

This showed me how Visionaries and growth companies assess risk, understand accidents, opportunism before coming up with a detailed strategic planning.

Understanding risk and evaluating is another important aspect of progress. Many and naturally tend to be Risk Averse. It is a tendency to prefer certainty to uncertainty. If you are risk averse, you look for the value or money you will recover rather than playing the game. If you always look for short term value over the long term gains, you are looking to avoid risk and play it safe without looking for avenue to reduce the risk.

“If you invent frequently and are willing to fail, then you never get to that point where you really need to bet the whole company” - Jeff Bezos

When Boeing was coming out of World War II. It was specializing on bombers and military jets. But with new-found peace problem, company was in shambles. It was laying off 70,000 employees. Companies Lockheed and Douglas were making in-roads in commercial aircraft like Constellation and DC-4. William Allen then president of Boeing, knew commercial aircraft is the future. He was looking for answer on how to pivot and differentiate from its competitors. He found it when he was traveling in their new B-47 cruising at 600mph. While he was flying, he enjoyed it rather than the slow DC-6 propeller. Furthermore, he figured future is in jets.

William McPherson Allen, analyzing the production cost, long term benefits, technical risk he continued bet on the future of commercial airlines was jet aircraft. No customers willing to buy in to the new commercial aircraft as Boeing lacked experience in this area. They didn’t have money. He scraped enough by betting the company to gather $16 million to build the prototype. Nearly 1/4 of the company’s assets. If they failed, company is doomed.

First test flight for Boeing 707 happened on 1954. Test pilot Tex Johnston at 12,000 feet high, found the flight quiet, vibration free. Jet aircraft was a long term bet. After burning $16 million in development, after 3 years yet to sell one aircraft. He was testing, making it perfect, nurturing. In 1955, when 200,000 spectators at Lake Washington were there to see speedboats. He made the aircraft fly and rest is history.

707 got the first order from Pam Am airlines. Boeing prioritized customers and made changes to design to accommodate their needs. Boeing changed the air travel forever.

Internally Boeing formulated a model -BHAG which was introduced in the book Built to Last by Jim Collins. Big Hairy Audacious Goals, which help stimulate the progress. Best BHAGs has a box of both long term and oozes sense of urgency. What does it do ?

If you are Boeing, you defy the odds and commit to audacious goals. It is a powerful concept. Even [Vikas - Liquid Propelled Rocket Engines](https://en.wikipedia.org/wiki/Vikas_(rocket_engine) were audacious goals that stimulate and help propel the progress as slingshot momentum. 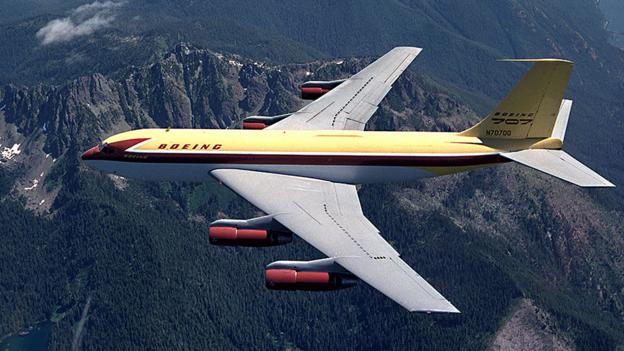 It is risky not to take chances

“In a world that’s changing really quickly, the only strategy that is guaranteed to fail is not taking risks” - Mark Zuckerberg

Mark Zuckerberg, said he likes to have people around him who were in it for long term. Staying true to the vision where you want to go and persistence is the key while you bet on things. Beyoncé, pop singer recognized the need for risk and being audacious when she released her album in 2013 directly in Apple Music without any promotions. Harvard Business did a case study on this audacity and risk venture. It was definitely giving Beyoncé sleepless nights, but she had a vision,

I felt like I wanted to follow in the footsteps of Madonna and be a powerhouse and have my own empire, And show other women when you get to this point in your career, you don’t have to go sign with someone else and share your money and your success, you can do it yourself” - Beyoncé

When there is so much to fail, highly successful people have risked and were audacious and trusted in themselves and their ideas. It is not thoughtless for sure, lot would have gone into this risk taking venture, but nevertheless they did go for it. They were all saying,” It is too risky not to take risks and live the life and progress”