Many people might have heard of language Sanskrit. It was recently I personally came across language named Avestan. Before we dive further, I want to draw out this quick language chart for your reference so you can follow along. 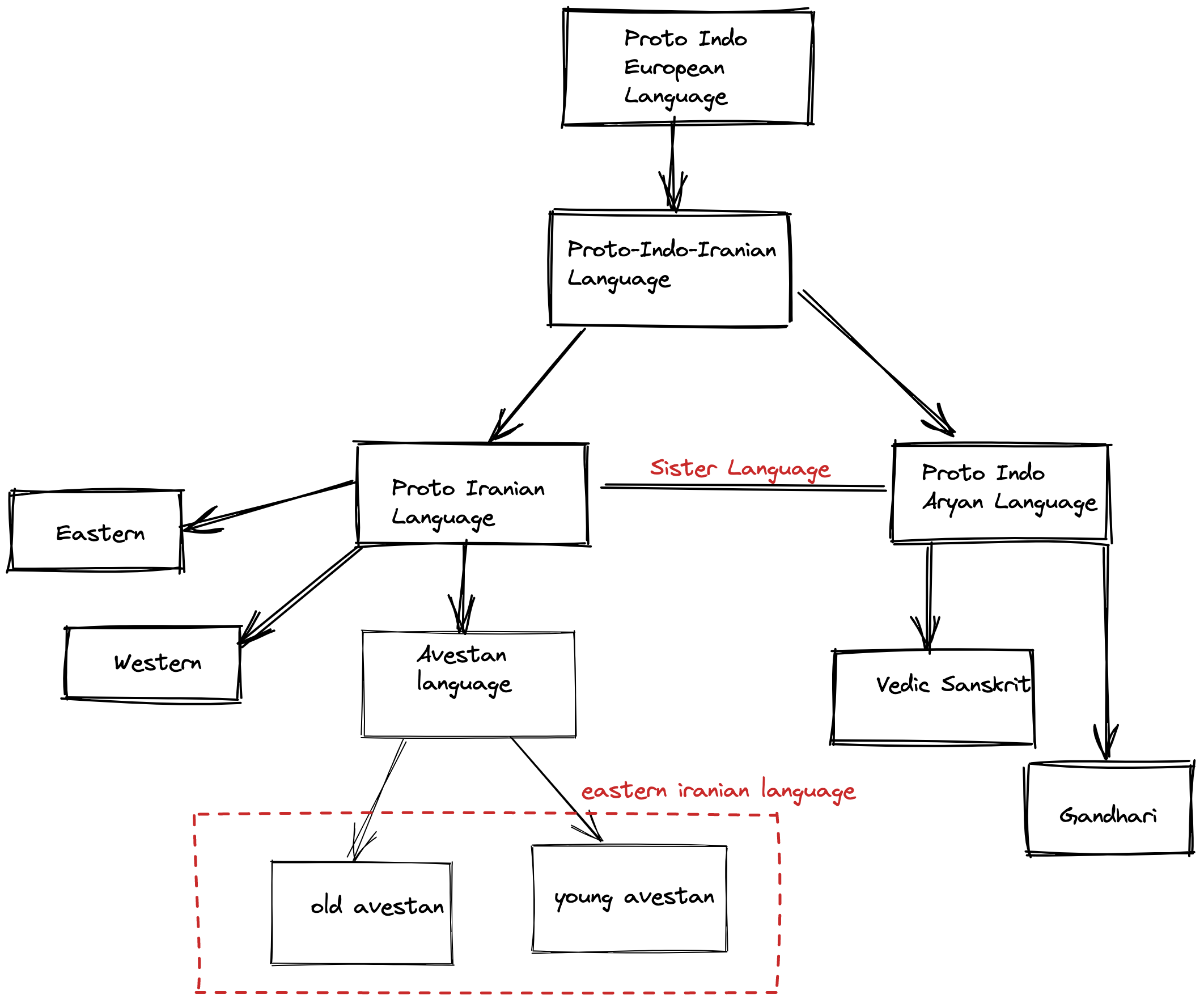 If you notice, Avestan and Sanskrit had a common ancestor. It branched out while retaining some traits. Languages affect cultures and vice versa. Old Avestan is quite close in both grammar and lexicon to Vedic Sanskrit, the oldest Indo-Aryan language (Most of the Vedic texts are written with)

For example, the four directions of the sky are named, just as in India (Sanskrit/Prakrit) and in Indo-European in general, by looking eastwards, and the east is the first in such lists (WITZEL 1972). The Persian kings, too, arranged the lists of their provinces in pradakia

Gathas are lexically similar (blood relative) to Gatha(India). Meaning, they are similar in words and sounds and retaining meanings of some words. Avestan and Sanskrit are called Cognates (having common parent) by historical linguists.

Karl Hoffman, a German Indo-Europeanist and Indo-Iranist. Hoffmann was mainly interested in Indo-Iranian studies. His studies are essentially devoted to Vedic, transmitted in India, and to Avestan and Old Persian on the Iranian side. He introduced a language category Indo-Iranian owing to similarities between Old Iranian Language and Vedic.

Since Vedic, as the religious language of ancient India, is amply attested; but the evidence for the two Old Iranian languages is very limited. Hoffmann often brought Vedic, as the most closely related language, into his arguments. This practice made it possible for him to release Old Iranian problems from their isolation, that is, to put content-related or linguistic questions in a new light or to rearrange them by approaching them from Vedic

Hoffmann’s book on Avestan appeared after his death: Avestische Laut- und Flexionslehre (1996, with B. Forssmann). He did a historical comparison of Old Avestan and Vedic scriptures.

Avestan is mostly orally transmitted language without scripts. It is known from manuscripts found in Iran and Gujarat. The earliest manuscript dates from A.D. 1288.

The large number of letters used suggests that their invention resulted from an attempt to record an orally recited text with all its phonetic nuances. For that reason the Avestan script must have been the deliberate invention or creation of a scholar or of a group of scholars. Source- Morgenstierne, “Orthography and Sound-system,” pp. 31-33.

The Avestan script is based on the Pahlavi script in its cursive form as used by theologians of the Zoroastrian church when writing their books. The Avesta speaks of several lands that include the SaptaSindhu (Sindhu-Sarasvati region of North and Northwest India). The scripture of the Zoroastrians is the Avesta. It includes the Yasna (Sanskrit yajna) with the G¯ath¯as of Zarathushtra, Videvdat or Vendidad (Vi-daeva-dat, “antiDaeva”), and Yaˇst (hymn), which are hymns for worship. During the Sasanian period the Avesta was translated into Pahlavi and this version is called Zend Avesta.

Ahura Mazda, the supreme God of the Zoroastrian faith. He is self-created, omniscient, omnipresent, holy, invisible, and beyond human conceptualization.

My sixth name is understanding; my seventh is Intelligent One; my eighth name is Knowledge; my ninth is Endowed with Knowledge; my twentieth is Mazda (Wisdom). I am the Wise One; my name is the Wisest of the Wise.

This is similar to concept of Purusha in Vedic Sanskrit literature - Vedas. Many deities are identical in the Zoroastrian (Avesta) and the Vedic systems.

Weapons mentioned in Vedic Sanskrit and Avesta are similar. It may be attributed to Weapons discovered at Potapovka sites (are very similar to those described in the Vedas and the Avesta). Loan words, cremation sites, cultures, there are parallels in terms of gods, tradition, some might even intersect. Language for me is view into history and another view into how we evolved. More you read and analyze, more you see end of the say we are simple humans before anything.